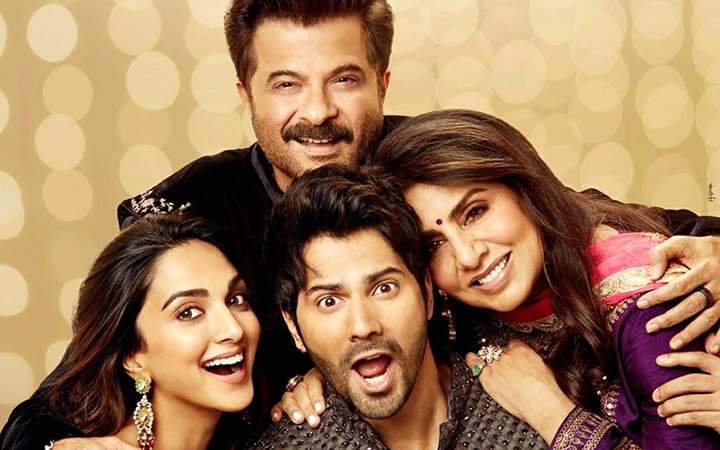 When was the last time a Hindi film juxtaposed a serious issue like divorce with dollops of humour? Generally speaking, most storytellers take the safe route: the estranged couple bury the hatchet and move on in life, as a couple. All’s well that ends well.

JUG JUGG JEEYO – directed by Raj Mehta – takes a parallel route. We got an inkling of its plot when we watched its trailer, but there’s more to this family saga than romance, laughter, heartbreaks and heartaches. Sure, the problems are very, very real, but the culmination is very unconventional too. More on that later.

Also, JUG JUGG JEEYO isn’t one of those traditional movies with an orthodox look at relationships, although the characters are very desi at heart. That’s one of the reasons why JUG JUGG JEEYO works. Now let’s give you a gist of its story, without spoilers, of course.

Five years later, Kuku and Naina – who have relocated to Toronto, Canada – are on the verge of separation. They fly to India for Ginni’s wedding and decide to inform the family of their plans [of divorce], after the marriage celebrations conclude.

The story takes a dramatic turn when Kuku learns of his father’s plans of divorcing his mother, soon after Ginni’s wedding. What happens next?

Crumbling marriages and legal separation have been depicted umpteen times on the big screen, but the writers of JUG JUGG JEEYO offer something hatke this time: the goings-on are soaked in humour, although the subject is very serious by nature.

The graph of the story, again, doesn’t take the beaten path. The writers pepper generous doses of humour and witty lines in the first hour, even though uncomfortable and unpleasant situations crop up now and then. It’s at the pre-interval point that the wheels start moving and things get serious.

The fireworks are reserved for the middle act, soon after the intermission. Four episodes in particular – that occur one after the other – take the film to a dramatic high:

The writing is, without doubt, the soul of JUG JUGG JEEYO. Besides the above-mentioned sequences, a number of moments in the narrative catch your eye and it’s not limited to the dramatic ones. Even the humour injected at regular intervals – especially the sequences involving Varun’s brother-in-law [Maniesh Paul] – is sure to bring the house down.

However, it’s the finale that will meet with diverse opinions. Will the conservative audiences – especially in the heartland – accept it? Was an easier way out, a more conventional finale the need of the hour? Will be interesting to see the reactions once the film releases.

Raj Mehta’s direction is top notch. GOOD NEWWZ [2019], his directorial debut, dealt with two couples caught in an unusual situation. JUG JUGG JEEYO is in the same zone, but the couples are inter-related and that makes it even more interesting. His execution is simple, but effective.

The soundtrack is one of the USPs of the film. ‘The Punjaabban Song’ is enticing. ‘Rangisari’, played at the end credits, is soulful. ‘Dupatta’ works because it comes at a crucial point.

The performances are of a high order. Varun Dhawan essays his part with precision. Watch him in the dramatic confrontations, you will realise he has come a long way as an actor. Kiara Advani looks gorgeous, but that’s not all. She gets the opportunity to make a strong impression in portions that show her lose temper.

Anil Kapoor is flawless. He balances the dramatic highs and lows like a true veteran and puts up a sparkling act. It’s wonderful to see Neetu Kapoor on the big screen again. She’s brilliant. After DO DOONI CHAAR [2010], this is yet another film that stands out in her repertoire.

Maniesh Paul is in terrific form, his comic timing is spot on. How one wishes one saw more of him in movies. Prajakta Koli is lovely and an absolute natural. Watch her heartbreaking moment with her family towards the finale, she is super. Tisca Chopra is delightful in a cameo.

On the whole, JUG JUGG JEEYO is a winner. It works for varied reasons, the most important one being it balances drama, humour and emotions seamlessly. The strong emotional quotient, in the second hour especially, is one factor that’s sure to attract families in hordes. Watch it with your loved ones, this one’s worthy of a recommendation.